Sudha Nair is a recent winner of the Amazon KDP Pen to Publish contest for her debut novel, ‘The Wedding Tamasha’. Formerly a techie, she used to write code, now she writes books. A self-professed chronic daydreamer, she also enjoys reading, singing, and soaking in the view of the ocean whenever possible. She has written several short stories for online magazines. Her short story, The Sneaky Blogger, was published in Vengeance, an anthology by Wrimo India. She is currently working on her next novel. She lives with her family in Bangalore, India. 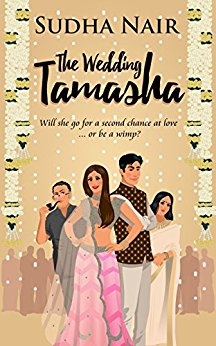 What is the story behind your book ‘The Wedding Tamasha’. Where did you get your idea for the book?

My brother was going to be married in Chennai in December 2015 when heavy floods hit the city. The airport was shut down, the situation was so bad that we were all very worried. Luckily, conditions improved miraculously just a week before the wedding and things went ahead smoothly. That’s when I wondered, What if? something had gone wrong, and everything hadn’t turned out as it had.

Once the thought of writing about a wedding in trouble came into my head, I also needed a protagonist who was in worse trouble than the wedding itself, and that’s how Shweta’s character was born. She’s the newly married kid sister who is invited to her brother’s wedding.

The quirky and impulsive protagonist Shweta, however, has run away from her husband in the US and is trying to make ends meet by working at a Mexican cafe so that she can buy a ticket to get back home. She is alone and thousands of miles away from her family. But she has no choice than to come back to India now and reveal the truth to her parents. What would she do if her husband came to the wedding and demanded that she go back with him? How would she deal with it? How would the parents deal with the situation? That’s what the story is about.

The pressure in the Indian society for girls to marry by a certain age and the prospect of an arranged marriage to a stranger is still very much a challenge. While some marriages turn out to be lucky matches, there are many that don’t, and then there are some that are horrible. I wanted to bring those truths to light and hopefully inspire women to take charge of their lives no matter which side of the fence they find themselves on.

Challenges were many because it was a debut novel. Right from the mental to the physical aspects of writing, this book took a lot of work. Being a short story writer, getting a book in the novel form was a big challenge. It took months to write the first draft, and I was always beset by self-doubt. The Wedding Tamasha also has a huge cast, and making sure every character had an important role to play was very essential. That meant paying attention to details and making sure I didn’t miss anything. After the first draft, I let the novel rest for about six months, then picked it up again and edited it until I was personally satisfied. Then came the attention to the cover, and making sure the novel was professionally edited and proofread.

Being an author is also difficult when you juggle kids and family. It was hard to devote time to writing except when the kids were at school. It was a fine balancing act.

Do the best that you can at this time.

I pen my thoughts into a journal every day. It has helped me put my worries and anxieties onto the page and focus on what’s important. Many a times when I’m stuck on a story, I write to clear my thoughts. I’m a plotter and I need a plan before I start. When I can’t write or I’m stuck, I pay attention to how I feel and I intuitively know when something in the story is not working. I try to write every day but whenever it’s not possible, I allow myself the time off. After years of agonizing over every word written or not written, every day missed, I’ve learnt to accept the fact that I sometimes have to wait for the ideas to flow and get on to the page. I do fret about daily writing targets but I also make a conscious effort to let go whenever I’m unable to meet them.

THE WEDDING TAMASHA won the Amazon KDP Pen to Publish 2017 contest and was my debut novel. It took about two years to complete from its inception to the final version. The culmination of my blood, sweat and tears into an award was the most unbelievable and the best part of my writing life.

I’m planning on continuing the story of the family in THE WEDDING TAMASHA. The series to be named “The Menon Women” will feature different women protagonists from the Menon family and span over a few decades of their lives. Each story will be unique in its appeal to readers, and deal with different age groups and varied challenges.

Practice writing every day, read widely, learn more about your craft, and last but not the least, take care of your health.

Storieo
Published in Interview on Feb 2, 2018