Deepti Menon has always loved the written word. She began to write at the age of ten, and was lucky enough to have travelled around the country, being an Army kid. Her experiences during those years helped hone her interest and her flair for writing. Her first book, ‘Arms and the Woman’, published in 2002, takes a light-hearted look at the life of an Army wife. 2013 and 2014 were lucky for her, as many of her short stories were chosen for anthologies. She also has a book of poems, titled ‘Deeparadhana of Poems’, lovingly compiled by her mother, herself a talented writer.

We will talk with Deepti about her latest book ‘Shadow in the Mirror’, a psychological thriller published by Readomania in 2016. 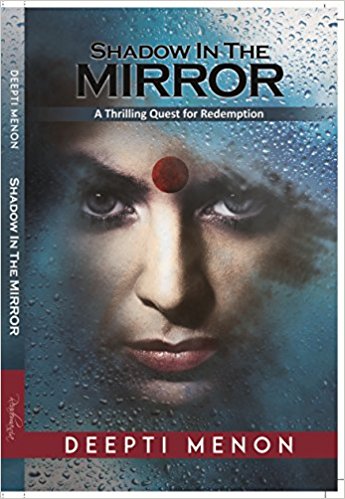 What is the story behind your book ‘Shadow in the Mirror’. Where did you get your idea for the book?

My book ‘Shadow in the Mirror’ was created out of a small germ of an idea that evolved in my mind and refused to let go. The more I thought about it, the more I realized that this could be the central point for a book that seesawed between fiction and a hint of autobiography.

I wrote this story twelve years back. At that time, I was teaching English to students of the High School and Plus Two. I was also an Army wife, living a wonderful nomadic life, seeing exotic places and meeting new people. Life was full and I loved it. Of course, there were times when putting in hours to write became a challenge, but I would sit down at my writing corner, whenever I could.

My life mantra has always been ‘Live and let live!’ I firmly believe that all the good one does comes back manifold, not just to oneself, but to one’s children as well. Besides, a clear conscience is the best pillow one can lay one’s head on!

Writing is also a matter of practice. I try and write a little every day. I have a blog named ‘Deep Ties’ which is a take-off on my name ‘Deepti’, in which I post humorous articles, book reviews and pieces on topics that touch my heart. For me, editing is as important as writing, and making every sentence shine forth is vital. My language is, for the most part, simple, because I believe that is the shortest way into the hearts of my readers.

I have three books to my credit, apart from about fourteen anthologies in which I have shared my short stories. My first book was titled ‘Arms and the Woman’ (Rupa Publishers, Delhi) and took a light-hearted look at my life as an Army wife. A book of deeply personal poems titled ‘Deeparadhana’ came next. In 2016, Readomania published ‘Shadow in the Mirror’ which is a psychological thriller.

An author uses words to translate her feelings. Hence, an author requires mastery over the language she writes in. She needs to be sincere about the topics she writes on. Finally, it is vital for an author to find space in the hearts of her readers through her writing.

I have two manuscripts that I had written for NANOWRIMO over two years. I am in the process of editing and cleaning them up at the moment.

Young writers have an originality about their writing which they must try and cultivate. Writers’ unique styles make them stand apart, and create a niche for themselves in the vast sea of writing. My advice would be to write from the heart and love what one writes.

“Lives of great men all remind us
We can make our lives sublime,
And, departing, leave behind us
Footprints on the sands of time;

Storieo
Published in Interview on Feb 1, 2018