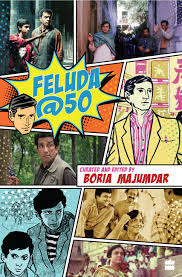 Imaginary Interview with the Golden Trio of Bengali Literature

Sitting at the far corner of the food court of the airport, I take out my favourite Bengali novel of all time, Sonar Kella (The Golden fortress) by none other than the famous Satyajit Ray, consisting of my childhood heroes, Topshe, Lal Mohan Ganguly and Feluda. Waiting for the announcement of my flight to Bangalore, I turn over the first few pages and smell the scent of the book (I do it for every new book I buy). Suddenly, I spot three extremely familiar looking men walking into the food court: a teenage boy, a short, balding mustached man and a tall, sharp-featured man, whose eyes flicker with an extraordinary intelligence. As soon as I recognize them to be my childhood heroes, my heartbeat starts to double and the reporter in me awakens. Who would miss the chance to interview them? I quickly grab my dictaphone and head over to them to take the most amazing interview I’ve ever taken. I introduce myself as a reporter for a newspaper and an online site (Storieo) and since they were astonished to see a young girl working for a newspaper, they agreed to give the interview I’ve always only dreamed of taking.

1) Me: First of all, I need to thank you for agreeing on giving these interviews. Hope you are just as excited as I am. Are you all ready?

Feluda: Yes, I am ready but please don’t ask too many questions since I have to board my flight in half an hour.

Topse: (smiles) Of course. I too am excited for this.

2) Me: Would you all like to say something about your personal life?

Feluda: There’s nothing much to say about my personal life. My family is from East Bengal but our original home is in a village named Sonadighi in the Bikrampur district of Dhaka, presently in Bangladesh. At nine, I lost my parents and was brought up by my uncle, Topshe’s father. My father was a school teacher, by the way. At school, I was known for my good memory. I was also good at shooting an airgun and playing cricket. Also, I am an early riser and almost all the days I start with yoga.

Topshe: Mine was a pretty normal childhood and since I’m half of Feluda’s age, he’s very protective of me. He taught me cycling when I was seven and how to use an airgun also. One of my talents that came to use in many of our adventures was that I could whistle very sharply. I started writing down my adventures with Feluda since I was 13. Therefore, I’d say that the readers are quite well acquainted with my growing up years.

Lal Mohan Ganguly: I was a brilliant student. Khub bhalo chatro chilam (I was a very good student). But ami Shatadal Sen ke defeat korte parini (But I could never defeat Shatadal Sen). I held record in high jump. Tokhon amar curly hair chilo, jano? (Did you know I had curly hair at that time?) Onek offers for acting came but I refused karon my dream to be professional writer (Many offers for acting came but I refused because my dream is to be a professional writer). Since the name Lal Mohan Ganguly is not exciting enough, I write in the name of Jatayu.

3) Me: (To Feluda) Why did you choose to pursue a career as a detective?

Feluda: From childhood, I’ve read various crime fictions and I’ve admired Sherlock Holmes solving cases with his analytical skills. It instilled the dream of being a detective in me since I was a child. Since I’m a challenge lover, I enjoy being a detective and the investigative part of the job.

Topshe (butts in): He has very good analytical ability as well as observation skills which helped him to solve cases.

4) Me: (To Feluda) Do you consider yourself as a leader?

(Before Feluda could answer) Topshe: Definitely a leader because he is a strong willed individual, works well with others due to his good communication skills and can take control of situations easily. Moreover as a leader, in order to train me, Feluda often tested my deductive knowledge which I used to pass satisfactorily.

Lal Mohan Ganguli: Not to forget he make decisions ekdom somoy moto (makes decisions at the correct time). Mystery solve korar beshi bhag somoye calling a meeting. (While solving a mystery, he calls for a meeting most of the time). Felubabur special gift is to solve problems by anasing and thinking about them crictally.

Me (thinks to myself): You mean analysing and critically?

Feluda (murmurs to himself): Wasn’t the question directed to me?

5) Me: According to the three of you, what was the most challenging case that you have worked on?

Feluda: I’d say Sonar Kella (The Golden Fortress) was the most challenging case I have worked on. Dealing with a kid who was said to remember events of his previous life was tough. Even though Mukul gave descriptions somewhat appropriately there were many conclusions to those. For example, when Mukul said that his house had lots of gems, it was thought that he was rich. But later it was found out that his father was a gem-cutter and the visions had nothing to do with him being rich. Different conclusions are often confusing.

Topshe: I completely agree with Feluda. That case was a bit complicated than others.

Lal Mohan Ganguly (angry): Hya? You both do not think Maganlal dangerous? Maganlal threaten you, Felubabu! Maganlal threw knife at me! God!

Feluda: I have used it as infrequently as possible but I do keep it with me at all times, if needed.

Topshe: Actually, to be honest, he’s a very non violent person so he doesn’t use the weapon much.

7) Me: How do you all spend your leisurely time?

Feluda: As most of you know, I have diverse interests. I study almost everything- space travel, chess, cookery, western music, both English and Bengali fonts, vintage cars, hypnotism and history. I also read about the I am visiting, beforehand. I am a penchant for old books.

Topshe: I read a lot of books to enhance my knowledge just like Feluda but to be honest, I love to read adventurous books my favourite being ‘The Adventures of Tintin’ comic series. Moreover, when Feluda studied something, he shared those information with me as well.

Lal Mohan Ganguly: Amar hobby tobby oto nei satyi bolte, karon I always writing (I don’t have many hobbies because I am always writing). Hya but seta chara (But yes apart from that) I like to collect different kinds of weapon. However, ami kintu refer kori to (I refer to) encyclopaedia for writing my novels.

8) Me (To Lal Mohan Ganguli): How did you feel when you first met Feluda?

Lal Mohan Ganguli: We first met on the train when I was on the trip to Rajasthan and Felubabu and Tapesh bhai were on their way to save Mukul. Jei muhurto theke (From the moment) Felubabu corrected an error in Saharay Shiharon, I started admiring him aar sedin theke (and from that day) every story written by me passes through the inspecting eyes of Feluda. My first impression of him was that he’s very serious, knowledgeable and intelligent which in future actually came true. What say Felubabu? I can also judge a person just by looking at them huh? (Laughs)

9) Me: (To Topshe) Were your parents supportive of your thirst for adventure?

Topshe: By the time of Kailashe Kelenkari, I had finished my secondary education. Though my mother was a bit concerned regarding my studies and career, my father always said that I am lucky to have Feluda as my mentor.

10) Me: (To Feluda) Do you think that Lal Mohan Babu has helped you in solving cases? What do you think of him?

Feluda: Though I had to correct his silly mistakes in his books, for example, he confuses hippos with walruses in Bakshyo Rahashyo, I still think he is intelligent, unpredictable and sometimes resourceful. He does act bravely sometimes which is quite unexpected of him, like his use of the boomerang in Baksho Rahashyo and that of the jap jantro in Joto Kando Kathmandute.

Topshe (looked at me): If you ask me, I would say he is humorous and is a constant source of entertainment for us. (Laughs)

11) Me: (To Topshe and Lal Mohan Babu) According to you both, what are Feluda’s top three qualities?

Topshe: Selecting any three qualities of Feluda is tough. Did you know he gave me tips at first on writing? He-

Lal Mohan Ganguly (butts in): The whole story of Bombaiyer Bombette is banano (made) by Felubabu, jano (you know)?

Topshe: If I had to select top 3 qualities, I’d choose his ability to pay attention to little details, understanding body language and his strong perception. He is very intuitive as well.

Lal Mohan Ganguly: Ami bolbo toh (I would say) my favourite quality of him is sob somoye alert thaka (all the time he’s alert). Tarpor onyo lok seje proshno kora (Then disguising as another person to question people). Disguises. Khub bhalo seta te (Very good in that) Felubabu. And not to forget onar (his) martial skills.

12) Me: What are your messages to the young readers of TTIS?

Feluda: In this new era of internet and video games, the habit and interest in reading books has reduced a lot. So I would suggest everyone to read books because they help you gain knowledge about the world.

Topshe: Follow your heart. Do what you enjoy doing and you will automatically start enjoying your life. That’s all I have to say.

Lal Mohan Ganguly: My new book is releasing in Poila baisakh. Mone kore porbe tomra sobai (Do remember to read it you all). Ainar rahashyo is the book’s name. Euta te aro bhalo kore likhechi (In this I have written more nicely). Adventure. Khub ache (Too much of) adventure. Ei nao tomar jonyo signed copy (For you a signed copy, take it).

Me (takes it): Thank you Lal Mohan Babu. I appreciate it.

I lunged forward to take the precious gift from Jatayu, Still riding on an adrenaline rush I faltered badly and the book fell from my hands. I bent down to pick the book up and was getting ready to profusely apologise to Lal Mohan Babu, when I noticed the empty chairs all around me! The book I picked up was Sonar Kella. Absolutely perplexed, I heard the announcement for the boarding of my flight. I rushed with my baggage to the gates trying to make sense of the really exciting interview i just took. I still am…..