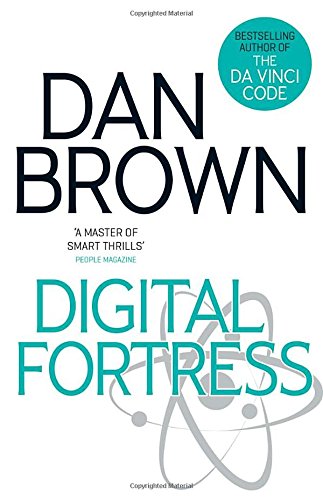 For most fans of the thriller-mystery-history genre, Dan Brown is a name synonymous with this category itself. A master story-teller with an uncanny knack for seamlessly merging apparently different aspects into one cohesive theory. On this front ,the book doesn’t disappoint especially it being his first standalone novel,which would set the course for his successive books,his trademark style of a male/female protagonist, an awe-inspiring , well-read personality paired with an equally stunning partner of the opposite sex, their quest for the the truth, riveting back to history,just reaching in time and averting a major catastrophe.Huff! For readers unaccustomed with his works, Digital Fortress serves as the best starter to embark on a journey of Europe,the splendour of Spain,the medieval-era churches with David Becker , professor and a foreign language specialist  sent on a covert recce to find a treasure that would save the US its face and protect the world from annihilation  : an encryption code pass-key from a dead-man. Running parallely is a diabolical plot which threatens to finish off the very purpose of NSA’s existence, the premier intelligence agency of the United States,  When it’s multi-billion dollar technological mammoth, TRANSLTR, the knowledge of it’s existence remaining within the walls of NSA, encounters an unbreakable,the head cryptographer Susan Fletcher, a gorgeous yet exceptional programmer is called in. What Susan discovers in the course of breaking the code is something she hadn’t believed even in her wildest dreams : Digital Fortress,a bait to which the world’s most powerful intelligence agency was held hostage to. It was just a matter of time before NSA’s whole database would be accessible to every person with a router-modem .Gradually ,she realises the stakes of the game , a game in which she had voluntarily participated,and uncovers betrayal,treachery,lies..above all deception.,layered under honour,trust and national security. Will she make it on time to save herself as well as her life’s love? The plot is wicked and with each turning page it unravels…..And just when you had thought that “Aha, I know what the next scenario would be!” , Brown drops a bombshell. You cannot but applaud his sense of timing and the mind-boggling amount of research that has been put in to the creation of this riveting,thought-provoking masterpiece.

Dan does the fine work of balancing the views on public privacy V/s and government authorised mass surveillance snooping ,ironically to protect national interests and their security, a issue which is hotly debated topic. Seemingly difficult topics of programming,encryption,computer-coding are effortlessly blended with incredible characters,cutting edge technological wizardry and the dark corridors of intelligence networks and their attitude: Nation above all. The real-time threat emanating from cyber theft,digital extortion, terrorism are duly addressed in a lucid yet engaging manner which will linger in the minds of the readers for a long time.  Seasoned with real-life human emotions and topped with oodles of thrill, Digital Fortress is bound to enrapture the reader and give him an adrenaline rush. A must read for ANY book-worm wanting to know more about the secret-world.The reader would definitely return,craving for more to quench his thirst.

P.S. : For all Dan Brown lovers who are reading this,do look out for a copy of ORIGIN, his latest Robert Langdon venture to be released on 10-03-2017. Save the date!! If you liked this review( and of course the book),please do comment your suggestions,criticisms…..just any kind of feedback!! Buh-Byee!!